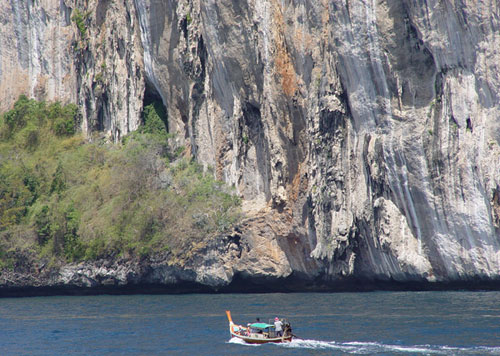 With its origins in coral, limestone is brittle.You see countless cracks or faults in the rock created by pressure.When large faults slip, the limestone breaks off in blocks, often big enough to become these islands.Imagine huge limestone blocks floating on the Earth's crust like a cube of ice
floating in a glass of water. When continental plates drift, the limestone spins and bobs up and down just like ice does when you put your finger on the cubes. These cracks collect oxide before the rock rotates again, taking the iron ore high above sea level. Percolation enlarges the cracks, depositing particulates "downstream" as flowstone. Caves form along these cracks when water percolates downhill, filling the cavern with stalactites. Some cave roofs have holes leading to either sunlight or another cave, the earliest point of Hong creation. Eventually, the cavern will collapse, one way of forming a "Hong", which is Thai for chamber or room.
(More on this later.)

The top photo shows exterior stalactites created by percolation, and a long, deep Hong created by a collapsed semi-tidal cavern. The cavern remains at the back of the 2K "overnighter" Hong, relentlessly percolating away.

The bottom cave sits in mountains at the top of the Peninsula. It's easy to see how this river cave runs along a fault line, and how water seeping down the fault formed these stalactites. 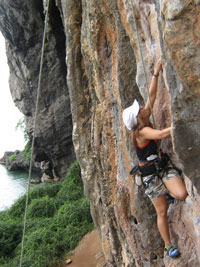 Water is today's theme. You are obviously surrounded by sea water, but it's rain water that creates the bizarre karst that attracts people to Phang Nga Bay. Even in the dry season, rainwater drips down inside the cave in a never-ending process that eats away the islands.
Heavy rainfall creates karst, so these grotesque shapes are usually found in the Tropics. The combination of raised reef limestone in a tropical monsoon region creates this great karst region.
The process that dissolves particles in the water that flows down through the island is called "Percolation" - in the same way as percolating water goes through coffee grounds. Clear water picks up the coffee molecules as it runs through the grounds, and drips brown-colored coffee into the pot.

Phang Nga's islands are sculpted by the same percolation process. The rainwater on top of the islands is slightly acidic, boosted by acids in decaying vegetation on top of the islands. Since limestone and seawater are both alkaline, percolation corrodes the rock faster than the seawater. With gravity on its side, rainwater finds cracks (faults) in the rocks and fills them. The difference in Ph (acid/alkaline) corrodes the rock, slowly dissolving molecules into the water. This enlarges the cracks until they find their way completely down through the rock to sea level, the water table in small limestone islands. These cracks enlarge into drainage tubes which become caves and "Hongs"- today's big attraction!

Some of South Thailand's largest stalactites are these 20 meter columns in a Far South expedition sea cave.

The oxide (iron) is carried down the three rivers that empy into the Bay from deposits high in mountains to the North. But we see oxide stains hundreds of meters above sea level, and the seas never rose more than 75 meters above today's heights

How did the oxide get up there?

It didn't -the islands spun down to the sea. That rotation took millions
of years, but you can see evidence of that spin from the Strata in the cliff faces. Right now, most of Phang Nga's strata sits at an angle of 45-60 degrees. In Ha Long Bay, Vietnam, strata can sit at 75-85 degrees. This drops the islands into the sea and the mud, allowing red
oxide to intrude into the cracks and cavities in the coral-based limestone.