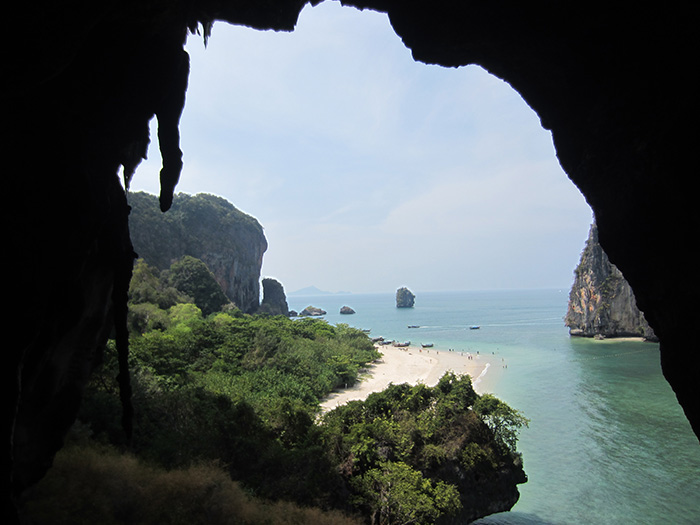 Railay Beach is a small peninsula located between the city of Krabi and Ao Nang. Accessible only by boat due to the high limestone cliffs cutting off mainland access. These cliffs attract rock climbers from all over the world, but the area is also popular due to its beautiful beaches and quiet relaxing atmosphere. Accommodation ranges from inexpensive bungalows popular with backpackers and climbers, to the renowned jet-set resort of Rayavadee. The three main areas of Railay consist of West Railay, East Railay and Tonsai, with Tonsai catering more to climbers. Railay beach was not severely hit by the tsunami

Krabi is a southern province on Thailand's Andaman seaboard with perhaps the country's oldest history of continued settlement. After dating stone tools, ancient colored pictures, beads, pottery and skeletal remains found in the province's many cliffs and caves, it is thought that Krabi has been home to homo sapiens since the period 25,000 - 35,000 B.C. In recorded times it was called the 'Ban Thai Samor', and was one of twelve towns that used, before people were widely literate, the monkey for their standard. At that time, c. 1200 A.D., Krabi was tributary to the Kingdom of Ligor, a city on the Kra Peninsula's east coast better known today as Nakhon Si Thammarat.

HistoryAt the start of the Rattanakosin period, about 200 years ago, when the capital was finally settled at Bangkok, an elephant kraal was established in Krabi by order of Chao Phraya Nakorn (Noi), the governor of Nakhon Si Thammarat, which was by then a part of the Thai Kingdom. He sent his vizier, the Phra Palad, to oversee this task, which was to ensure a regular supply of elephants for the larger town. So many followers emigrated in the steps of the Phra Palad that soon Krabi had a large community in three different boroughs : Pakasai, Khlong Pon, and Pak Lao. In 1872, King Chulalongkorn graciously elevated these to town status, called Krabi, a word that preserves in its meaning the monkey symbolism of the old standard. The town's first governor was Luang Thep Sena, though it continued a while as a dependency of Nakhon Si Thammarat. This was changed in 1875, when Krabi was raised to a fourth-level town in the old system of Thai government. Administrators then reported directly to the central government in Bangkok, and Krabi's history as a unique entity separated from the other provinces, had begun.